Founded in 1994 as a part of the Open Society Foundations’ global network, the Open Society Georgia Foundation (OSGF) works to build a vibrant and vocal civil society capable of holding government accountable to its citizens. The Foundation drives forward important policy debates and reforms.

Through grant-making and partnership projects funded from its national and international programs, the Foundation empowers civic organizations, civil rights activists and initiative groups to guard against threats to rights discourse and the risk of the country backtracking on democratic reform commitments.

Over the course of more than two decades of work in Georgia, the OSGF has made massive efforts to rebuff threats to democratic progress. The Foundation achieved this by strengthening independent public institutions and setting high standards in the key areas such as human rights protection, rule of law and good governance. The OSGF enhanced citizens’ participation in governance and decision-making, bolstered independent journalism and gave voice to minorities and vulnerable groups.

As a donor, the OSGF has been open to working with both well-established organizations and fledgling activist groups to advance change across its priority fields.

From 1994 onwards, the Foundation has invested over $100 million in fostering an open society in Georgia.

To achieve the change we seek, we conduct in-depth research and identify priority areas. Our research is largely geared towards identifying individuals and organizations best positioned to make a difference, and also the best tools to achieve change. Grant-making, advocacy, litigation, awareness campaigns, publications, and conferences are the tools we employ to achieve our ends.

OSGF has spearheaded and supported a number of public campaigns in recent years, such as This Affect You, Support Real Self-Governance, campaigns against criminal punishment for recreational drug use. The Foundation also helped local partners develop the capacity to monitor the distribution of foreign aid and implementation of European Union/Georgia Association Agreement.

OSGF has also played a crucial role in coordinating and supporting various coalitions of NGOs that pushed for reform in a variety of fields, including criminal justice, anti-discrimination, social equality, media freedom, public health and health rights.

Ten Facts about Georgia and the Open Society Foundations (1994-2018)

The Open Society Foundation was established in Georgia during the hardest times for the country. It was the first philanthropic organization to lend a helping hand to the scientists, artists and young people seeking international education.

For 25 years, the Open Society Georgia Foundation has supported more than 6000 projects and has awarded hundreds of Georgian organizations with startup grants. Many of them are still active and engaged in building an open society in Georgia. 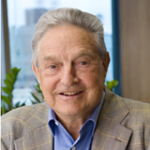 Under his leadership, the Open Society Foundations have supported individuals and organizations across the globe fighting for the freedom of expression, accountable government, and societies that promote justice and equality. The foundations have also provided school and university fees for thousands of promising students who would otherwise have been excluded from opportunities because of their identity or where they live.

In the light of attacks by anti-liberal groups particularly in 2018, the Financial Times granted George Soros the title of the Person of the Year as the liberal standard bearer.

The Open Society Georgia Foundation is governed by the Executive Board. The Board is composed of eminent and distinguished citizens with expertise in a variety of fields including media, finance, academia and health.

Team members of the Foundation are noted for their professionalism and passion for open society values. Together we make a difference in creating free and open society in Georgia.