Home The organizations of persons with disabilities, and associations of parents of children with special needs appeal to the President, and Members of the European Council

The organizations of persons with disabilities, and associations of parents of children with special needs appeal to the President, and Members of the European Council

TO: President of the European Council

Members of the European Council

Esteemed Members of the Council,

The opportunity to speed up the integration of Georgia into the EU has given great hope to our community. A European future and its associated development is directly linked to the welfare of people with disabilities, including access to affordable healthcare, quality education, employment, and dignified and independent living.

The recommendations of the European Commission published on the 17th of June have caused significant upheaval in the country. Many feel that European integration is now a very distant prospect. Accordingly, they are concerned that positive legislative and program changes previously undertaken by the government, with advocacy and support of our community as well as donors like the EU, will be significantly disrupted if not halted altogether. We fear that the refusal to grant EU candidate status may significantly hamper positive developments in Georgia, causing frustration and hopelessness among its population.

As depicted in the EC recommendations, the disabled community is one of the most marginalized groups in the country. Georgia carries a heavy Soviet legacy, and our community bears the collective traumatic memory of isolation and institutionalization. Individuals with disabilities and their parents face enormous challenges.  Despite this, the disability community, with support from European states, has achieved sizable changes. Primary among those achievements is an increased awareness of the population; nowadays, having a classmate or a coworker with disabilities is not considered unusual.

As a result of our advocacy, Georgia ratified the UN CRPD in 2014. We made every effort to develop the mechanisms for the implementation and monitoring of the CRPD at the central and local levels. In 2020, the Parliament of Georgia adopted the Law on Rights of Persons with Disabilities. While positive progress has been made at the legislative level, largely due to our advocacy efforts and investments, we still face enormous challenges in implementation of the legislation.

EU membership candidate status was and is seen as an opportunity to speed up the process of EU integration, which will reverberate in improvements in the situation of persons with disabilities and bring us closer to a life where we can enjoy equal rights.

If Georgia is not granted EU member candidate status, we fear that progress in this direction will halt. The main driver of all positive development in the country has been the perspective of EU integration. If we are stripped of this chance in such a historic moment of global development, we, the persons with disabilities and their parents, may not live to see any more positive changes.

We request that on the 24th of June, when the decision to grant EU membership candidate status is discussed and decided, that you take into consideration the position of the disability community of Georgia. On our behalf, we remain committed to actively work towards the fulfillment of all the conditions set by the EU to Georgia for EU membership.

Georgia’s integration into the EU and our commitment to European values is a historic choice and our strongest desire! 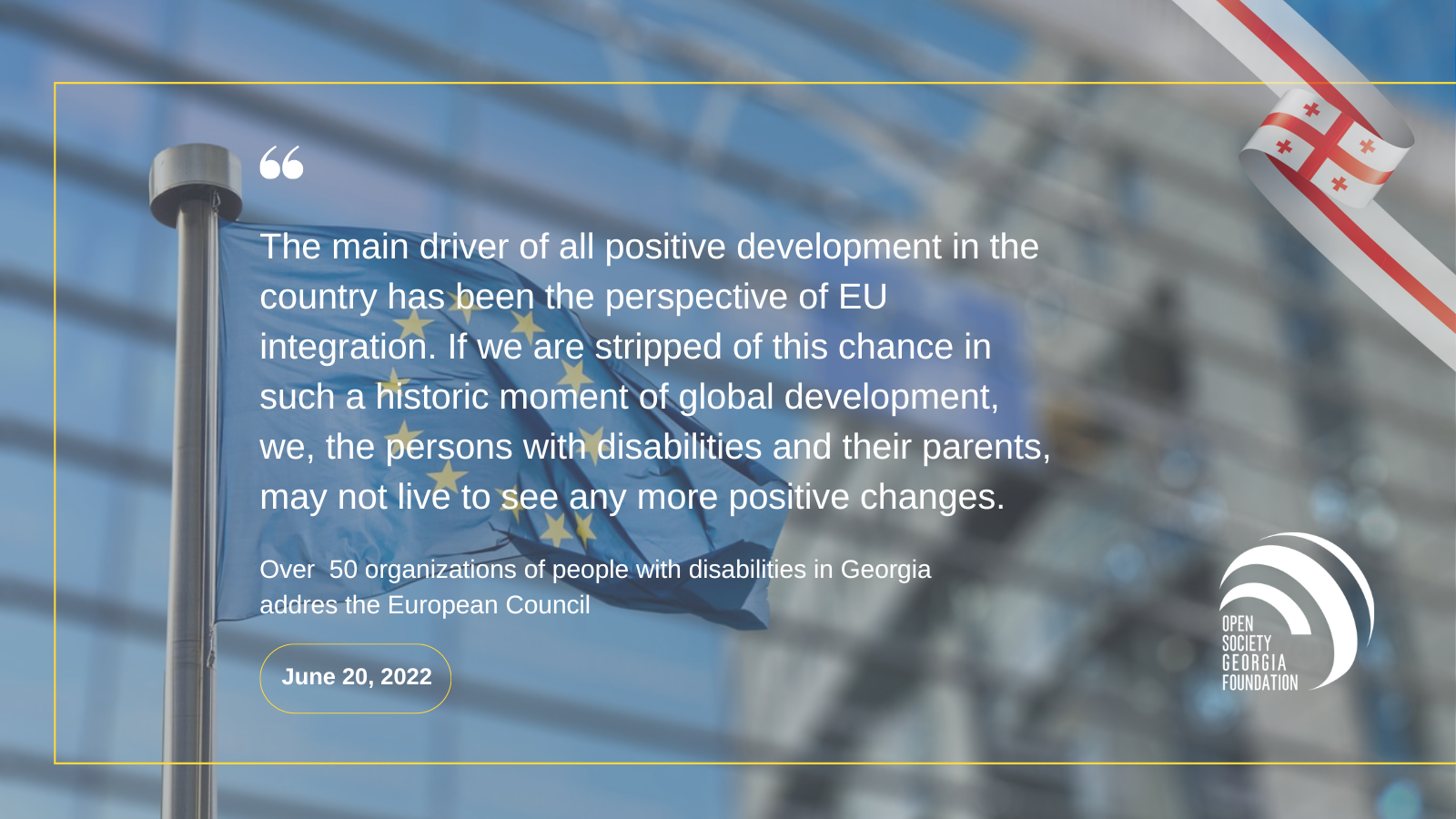 Address of Georgian People to EU

Evaluation of fulfillment of the Charles Michel document

Monitoring of A WAY AHEAD FOR GEORGIA Agreement Implementation