Home What did the “Georgian March” fail to count on Soros and the Public Defender?

What did the “Georgian March” fail to count on Soros and the Public Defender?

The anti-liberal political union “Georgian March” continues its campaign against the “Open Society Foundation”.  The members of the “Georgian March” voiced two pieces of information against the foundation on Obiektivi TV: 1. Soros allocated 4 million to fight against the Orthodox Church. 2. The Office of the Public Defender is a state institution and its funding by the Soros Foundation is “bribery” and the appropriateness of the funding itself is questionable. At the same time, Sandro Bregadze, one of the leaders of the Georgian March, said that they were appealing to the parliament to ban foreign funding of non-governmental organizations.

Sandro Bregadze, Georgian March: “About a week ago, George Soros allocated a large sum of money to open a new front of fighting against the Orthodoxy. Our so-called NGOs are also expecting to get about 4 million of this amount to open up a new front; we will not allow that, we have submitted a request to the parliament today to ban the foreign funding of the non-governmental organizations and to ban the Soros Foundation itself “(July 30, 2020).

Sandro Bregadze, Georgian March: “I was most of all appalled by one fact – the Public Defender’s Office is in fact a state institution and state organization; Soros has already given 160,000 to the Public Defender’s Office;  a private person, George Soros has given 160,000 GEL… Designated for human Rights activities and so on, but, of course, [this is a cover]. This is simply bribery” (August 2, 2020).

Irakli Shikhiashvili, Georgian March: “Our Public Defender… is financed by some Hungarian Jew, a billionaire…Now explain to me why he should have the opportunity to spread his poison in my country or what is the purpose of it all.” (August 9, 2020)

The information spread by the Georgian March is misinformation. 1. The Foundation has been allocated not 4 million but 1 million of additional Foundations to fight the pandemic, and the purpose of the Foundation is to fight the COVID-19 pandemic and not the Orthodox Church. 2. The Office of the Public Defender is not a state but an independent body, which is give the right to monitor the state by the Constitution and it receives funding from the Soros Foundation to protect the rights of the prisoners.

According to the Open Society Foundation, in 2020, the Open Society Georgia Foundation received an additional funding of $ 1 million to alleviate the situation caused by the COVID-19 pandemic, and not $ 4 million, as claimed by Sandro Bregadze. More than $ 800,000 from this sum was allocated from March to June for a variety of needs – including training hundreds of doctors in infectious disease management and developing guidelines, providing free legal aid services to laid-off, income-free and credit-strapped citizens, and to a number of vital psychological support services. Thousands of people in difficult socio-economic conditions received direct assistance, students had the opportunity to be involved in the online learning process, and local media received funding to be able to increase awareness of the population in the regions.

The projects funded by the Foundation during the pandemic include Internet and computers for 45 vulnerable high school students, Internet access in the village of Mirashkhani, Samtskhe-Javakheti Municipality, improving the quality of life of elderly people without caretakers, palliative patients and their families in times of COVID-19. The implemented COVID-19 related activities are described in detail in the Foundation’s report, and a list of funded projects is published on the Foundation’s website, including the names of the implementing organizations, initiative groups, or individuals. 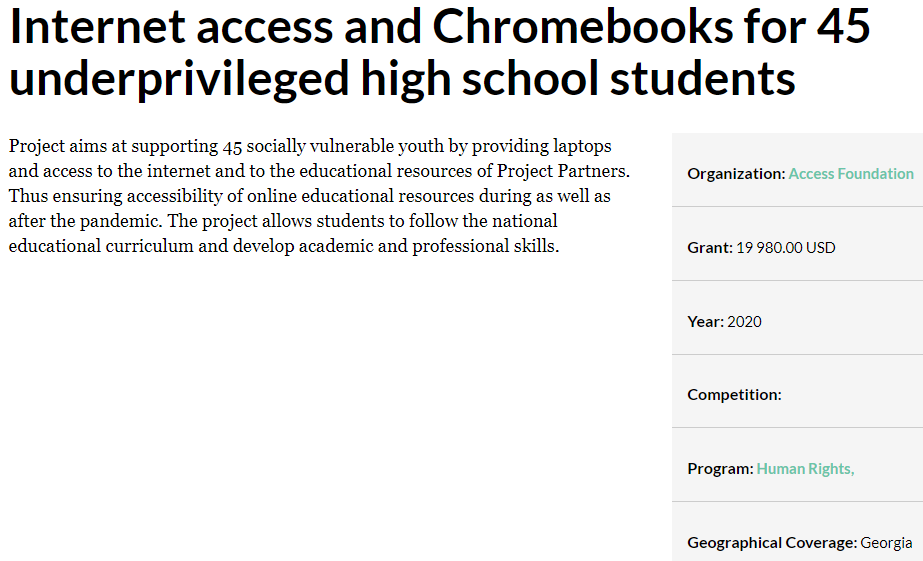 2. The Office of the Public Defender is not a state but an independent body, which gives the right to monitor the state by the Constitution and it receives funding from the Soros Foundation to protect the rights of the prisoners.

The Office of the Public Defender is a constitutional body whose constitutional obligation is to oversee the protection of human rights by the state. The Office is independent in its activities. According to Article 35 of the Constitution of Georgia:

Supervision of the protection of human rights within the territory of Georgia shall be exercised by the Public Defender of Georgia, who shall be elected for a term of 6 years by a majority of at least three-fifths of the total number of the Members of Parliament. The same person shall not be elected as a Public Defender consecutively.

At the same time, the Organic Law of Georgia on the Public Defender of Georgia does not restrict funding from various donor organizations. Such restrictions do not apply to other public institutions in Georgia either.

The public defender’s office has been assisted in protecting human rights by various international organizations for years, including the European Union, the United States Agency for International Development (USAID), and the Soros Foundation.

According to the Open Society Georgia Foundation, in 2020 they provided funding to the Public Defender’s Office for a project aiming at strengthening protection against torture and ill-treatment in closed institutions and monitoring these institutions to reduce the incidence of ill-treatment of prisoners, detainees, and patients.

The demands for restrictions on the financial support of the activities of non-governmental organizations and international organizations and their activities have been part of Russian and anti-Western propaganda for years, and they have been voiced by various actors. This approach is in line with Russia’s 2015 state security strategy. The document names the following actors as the main threats to state and public security:

“The actions… of the foreign and international non-governmental organizations  aimed against Russia’s territorial integrity, the country’s internal political and social destabilization, including promotion of “color revolutions” and actions against Russia’s traditional religious values.”

About the Georgian March

The appearance of the ultra-nationalist group “Georgian March” in the summer of 2017 is associated with anti-migrant rallies. The leaders of the march are distinguished by xenophobic and homophobic statements. One of the founders of the “Georgian March” is the former Deputy Minister of the “Georgian Dream” Sandro Bregadze. In 2020, the union announced its transformation into a political party and plans to participate in the parliamentary elections.